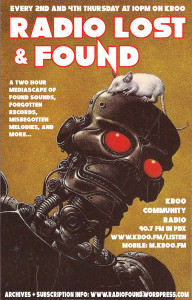 Earlier in the week, I'd received a memo telling me that scheduled maintenance on the station's servers might mean no web stream tonight, but happily, that was not the case. I tested it and everything - running the station's (40+ second delayed) web stream into the air room board and out into the aether again, etc. Worked just fine and dandy.

I played some about-to-be released music by electronic music pioneer and composer Suzanne Ciani - her interpretation of Baudelaire's Les Fleurs du mal (Flowers of Evil), which will be available from Finders Keepers Records next month.

I also played (and layered, via the aforementioned web looping method) some of the great recentish release by Paul Ellis and Daryl Groetsch, Interior Rhythms, which is available on Bandcamp.

Lots of fun stuff. I even managed to play some of the live Genesis record which has been riding around expectantly in my radio crate for many months.

Update Required To play the media you will need to either update your browser to a recent version or update your Flash plugin.
Topic tags:
Music
Genre(s):
Eclectic, Electronic, Environment/Sound Art, Experimental, Jazz, Punk, Rock and Roll, Spoken Arts