Earth First!: 40 years of direct action and agit-prop in defense of the home planet 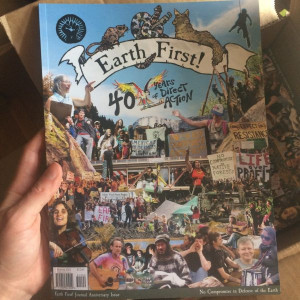 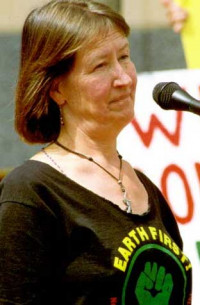 The radical direct-action environmental group Earth First! burst upon the scene in 1980, originating in the Southwest U.S., but within a few years spreading across the country and even around the world. The movement not only brought a biocentric perspective to wider public consciousness and raised the visibility of efforts to protect natural ecosystems, it helped re-inject the spirit of direct action into broader movements for social and environmental justice. Earth First! activists and activism helped fuel the "anti-globalization" movement of the 1990's that led up to the shut-down of the World Trade Organization meeting in Seattle in 1999. EF! was also a fore-runner of grassroots coalition-building with Native Americans and direct action in defense of sacred Indigenous lands.

Oregon became a hot-bed of Earth First! activity by 1983, with the Bald Mountain Road blockade and campaign,which today's guest Karen Pickett was involved in. Tree-sitting as a tactic began in Oregon in the Middle Santiam in 1984-5 and North Santiam/Breitenbush in 1986, and spread far and wide, leading to more and more inventive tactics to slow down the destruction of ancient forests and other ecosystems.

Pickett has been a grassroots activist for over 45 years, since the mid-1970's, working on issues of environmental justice, recycling, forest and species preservation, and also native rights, protecting civil rights of activists, and alliance building within the labor and environmental movements. She has been active with Earth First! since 1983, when she did her first civil disobedience action in defense of the earth, in the Kalmiopsis Wilderness in Oregon. She has been part of the core organizing in campaigns such as the Headwaters Forest campaign, Redwood Summer, Rainforest campaigns, Berkeley’s Styrofoam ban, and early campaigning challenging World Bank funding of environmentally destructive projects.

She was active with the Mobilization for Climate Justice and is still very involved in northern California forest campaigns. She is a member of the Board of Directors with the Global Justice Ecology Project, founder and coordinator of the Bay Area Coalition for Headwaters, and in 2007 launched the Roots of Change Media Education Project. leading college classes and non-profit workshops on relevant activist skills including media work and grassroots organizing. Karen is also currently working with the Earth First! Journal, the long-time voice of the movement.

We are still in our Fall Membership Drive and we really appreciate your financial support. To renew your membership, make a one-time donation, or become a new member, please go to kboo.fm to make your contribution.

For this program only, we will be offering copies of the Earth First! Journal's 40th anniversary issue (pictured to the right) or subscriptions to the Journal for contributions of $60 or more.

Update Required To play the media you will need to either update your browser to a recent version or update your Flash plugin.
Download audio file
Topic tags:
Activism, Energy/Natural Resources, Environment/Climate, Government/Politics

END_OF_DOCUMENT_TOKEN_TO_BE_REPLACED

The Monday Sampler
More Music for your Monday