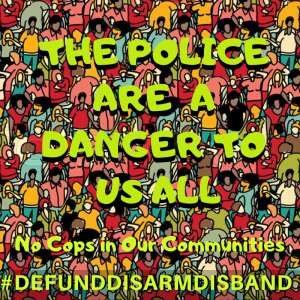 American society has long used over-policing as a way to violently control Black, Brown and poor communities and to generate state income from poverty. Gentrification displaces and breaks up communities and utilizes both police and private security to enforce this displacement. As houselessness becomes endemic we see the results of our city’s clumsy attempts to use policing to combat the issues associated with capitalism’s largest failure.

52% of Portland Police Bureau arrests in 2017 were of unhoused people. The vast majority of these arrests were for criminalized behavior associated with drug use, mental illness, or merely survival behaviors implemented by those living outside.
“Unwanted Person” calls to the Portland Police have risen 67% in the past year and comprise a large percentage of emergency and non emergency calls.

As reports of police collusion with White Nationalist groups rock Portland, we see developing movements to keep police out of our schools and other public spaces. High school and college students are vocally objecting to militarized police on their campuses. Unhoused people and their advocates are working to establish community-led response teams trained to provide assistance and resources to those who would otherwise be further threatened and traumatized by unnecessary police interactions.

Check in with folks from Portland Assembly and chat about the ways that policing threatens our communities and our autonomy and how we can reclaim both.

52% of PPB arrests are of unhoused people: https://www.oregonlive.com/portland/2018/06/portland_homeless_accounted_fo.html

DISARM PSU fights to end use of armed officers on PSU’s Campus: https://www.portlandmercury.com/blogtown/2019/02/28/26052365/rep-hernandez-files-bill-to-disarm-cops-on-psu-and-uo-campuses

Thank you Paul for inviting Jonathan back and adding Sarah's voice from Portland Assembly. You did provide a local PoTown focus to expand on your predecessor hour on KBOO, today's DEMOCRACY NOW scrutiny of Trump Swamp & Corporate America's warm embrace of Brazil's newly elected authoritarian leader, Jair Bolsonaro and his enthusiastic support for Brazil's former Military Dictatorship. Sarah began to re-focus to the Corporate take-over of U.S. universities from the regrettably awkward taped confrontation at City Council chambers when Jonathan tried to broaden his questioning of police union spokesman Daryl Turner into a discussion of the proposed uses of never-used Multnomah County Wapato Jail as a homeless services center.

I called in and asked about the failure of progressive activist communities to use the perfectly legal PR industry half as resourcefully as oligarchs like Trump and his partner in oligarchy, Vladimir Putin who long before any Democratic Party blame game of Russian meddling in the U.S. Political Economy of commercial broadcast media and as yet net neutral cyber mass media, long before the blame game pinning Trump's ascension on Oligarch Putin, the Russian leader had with much U.S. professional class collusion used our own PR industry as a client of Ketchum Communications to craft his Op Eds in U.S. publications and the shaping of RT on cyber platforms.
https://www.fastcompany.com/40437170/russia-quiet-public-relations-war

This gets at my question which may deserve other programs to address given the scope of my curiosity as to how privileged U.S. professional classes have remained silent about the corporate take-over of our institutions of higher learning.

How have these often socially liberal classes and their Professional Associations of well-compensated workers (often the cronies in Blue Democratic Cities and States and in Washington like the Daley Political and Police Machine in Chicago that for decades used counter-insurgency and torture techniques deemed new to U.S. when Abu Ghraib and Afghani tactics went viral along with Spokane's own contribution via the Mitchell Jessen Psychological Consultancy to the CIA) remained silent and in fact the prime demographic audience for NPR\CPB exclusion of WAGE SLAVES from their programming perspective?

Via the regularly corporate underwritten programming where every week is THIS WEEK ON WALL STREET or PLANET MONEY or BUSINESS INSIDER or MARKETPLACE or BLOOMBERG (the Neo-Liberal alternative to Daddy Warbucks and the Neo-Cons who embraced Neo-Liberal E-CON's con decades ago when they dropped protectionism from the Republican trade policy platform). And never is there any time or broadcast space for WAGE SLAVE WEEK and the view from Main Street where Wall Street has siphoned up all the money from by pooling risks for monopolists but leaving U.S. to 'market forces.'

So a couple of links to ponder as folks connect the dots between this morning's 7 AM to 8 AM KBOO feed of DEMOCRACY NOW's reports on the close ties between Trump and U.S. Authoritarianism and Brazil's hard right wing shift via the corruption of Brazil's left and the vacuum it left for the ascendance of Jair Bolsonaro who wants to return Brazil to the Great Glory of its Military Dictatorship past back in those dark and remote days of the 1970's and 80's...

And how it connects to the KBOO Wednesday Morning Talk Radio segment with Paul, Jonathan and Sarah's useful focus on local issues of corporate direction of the police and our Free and Open Marketplaces of Ideas, our colleges and universities and now bankrupt for-profit trade schools also not mentioned as part of the Obama legacy by NPR's 1A evening program...

(For U.S. this first link to Wikipedia page on Dan Mitrione, the rarely referenced by U.S. Journalism on the coast-to-coast Police Corruption scandals and terror tactics, Indiana Police Officer sent by a Washington program to Brazil's more liberal neighbor Uruguay back in the 1970's to teach and further develop uses of scientifically applied torture in the service of counter-insurgency):
https://en.wikipedia.org/wiki/Dan_Mitrione

And another ongoing Code of Silence or Omerta by our professional classes and their news media of choice on the corruption of our Corporate Caliphate's take-over of tax-payer funded once proud public bastions of higher education. Google this UCLA institution and see how many articles in the last 11 years since this linked Mother Jones piece has scrutinized the foot-hold of Junk Bond Ethos and impunity for the perps of Suite Crime as opposed to Street Crime in Ralph Nader's well-turned phrase:
https://www.motherjones.com/politics/2011/08/lowell-milken-institute-ucla/

Keep on doing and speaking out loud,