Author Thom Hartman on his new book The Hidden History of Monopolies: How Big Business Destroyed the American Dream 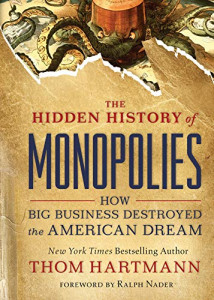 Author Thom Hartman spoke with KBOO's Althea Billings about his new book The Hidden History of Monopolies: How Big Business Destroyed the American Dream which launches virtually on August 25th with Powells.

The book covers how American monopolies dominate, control, and consume most of the energy of the U.S. economic system; they function the same as cancer does in a body, and, like cancer, they weaken systems while threatening to crash the entire body economy. American monopolies have also seized massive political power and use it to maintain their obscene profits and CEO salaries while crushing small competitors.

But Thom Hartmann, America's #1 progressive radio host, shows we've broken the control of behemoths like these before, and we can do it again.

Update Required To play the media you will need to either update your browser to a recent version or update your Flash plugin.
Download audio file
Topic tags:
Corporations, Economy

END_OF_DOCUMENT_TOKEN_TO_BE_REPLACED

Too Much Information with Abe and Traci
It'll be over soon