How Trump Stole 2020, with Greg Palast 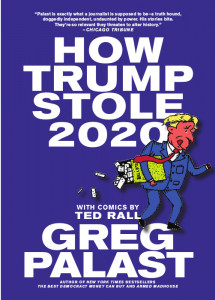 "We’re heading into a disaster — a very well-designed and intentional one. The GOP thought it all through and tested it in Georgia, Wisconsin and elsewhere. In November when Trump is up for re-election, this chaos will be everywhere."

PALAST is the investigative reporter for the Guardian, BBC Television, Democracy Now!, and Rolling Stone who broke the story of how George Bush stole
Florida in 2000 by purging thousands of innocent Black voters. He is the author of four New York Times bestsellers including The Best Democracy Money Can Buy and Billionaires & Ballot Bandits.

Before turning to journalism, Palast directed investigations of billion-dollar racketeering, fraud and financial manipulation cases for attorneys general and the Department of Justice, and advised unions and governments on four continents. Palast, who studied economics under Milton Friedman at the
University of Chicago, is also coauthor of Democracy & Regulation, published by the United Nations ILO, based on Palast’s lectures at the Cambridge University Department of Applied Economics and the University of Sao Paolo.

He is the winner of the Global Editors award for data journalism, and was named Patron of the Philosophical Society of Trinity College (previously awarded to Oscar Wilde and Jonathan Swift) and the Association of Mexican Reporters International Reporter of the Year.