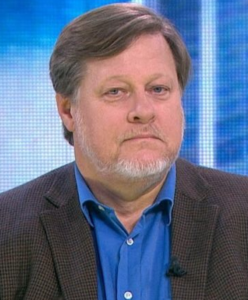 Kevin Zeese of Popular Resistance stops by the podcast to discuss his path to becoming an activist during protests in the 60’s and 70’s, what he’s learned from Ralph Nader, police brutality and militarization, Kevin’s long standing work on the Vietnam war and Venezuela, and the dynamics of “lesser evil voting.”

Kevin Zeese is a public interest attorney who has worked for economic, racial and environmental justice since graduating from George Washington Law School in 1980.

He co-directs PopularResistance.org which works to build the independent movement for transformational change. Kevin co-hosts,  "Clearing the FOG “ radio which airs on We Act Radio , Progressive Radio Network and other outlets.  He is recognized as a leading activist in the United States in the series Americans Who Tell the Truth.

Kevin was an organizer of the Occupation of Freedom Plaza in Washington, DC in 2011. He serves as president of Common Sense for Drug Policy and is a co-founder of the Drug Policy Foundation, now known as Drug Policy Alliance .

He is a co-founder of Health Over Profit for Everyone which seeks to put in place National Improved Medicare for All. Kevin is an advocate of Internet Freedom and is a leader of the campaign for Title II Net Neutrality to ensure equal access and treatment for everyone on the Internet. He is one of the organizers of We Are Cove Point which seeks to stop a fracked gas export terminal in southern Maryland.

He is an election integrity advocate who a co-founded TrueVote Maryland which led a successful campaign to end the use of paperless voting machines in the state.

Kevin is co-founder of Come Home America which brings people from across the political spectrum together to work against war and militarism. He served on the steering committees of the Chelsea Manning Support Network as well as on the advisory board of the Courage Foundation which supports Edward Snowden and other whistleblowers.

He has been active in independent and third party political campaigns, served as press secretary and spokesperson for Ralph Nader in 2004 and as a senior advisor to Jill Stein in 2016.  He ran for the US Senate in 2006; and he’s the only person ever nominated by the Green, Libertarian and Populist Parties of Maryland.

Check out our t-shirt store on Spreadshirt.com

Not a contributor on Patreon? You're missing out on amazing bonus content! Sign up to be one of our patrons today! - www.patreon.com/fortressonahill

A special thanks to our Patreon honorary producers - Will Ahrens, Fahim Shirazee, James O'Barr, Henry Szamota, Adam Bellows, Eric Phillips, Paul Appell, Julie Dupris, Thomas Benson, Emma P, Janet Hanson, Lawrence Taylor, and the Statist Quo Podcast.  You all are the engine that helps us power the podcast.  Thank you so much!!!

Not up for something recurring like Patreon, but want to give a couple bucks?!  Visit Paypal.me/fortressonahill to contribute!!

Fortress On A Hill is hosted, written, and produced by Chris 'Henri' Henrikson, Danny Sjursen, and Keagan Miller.

Note: The views expressed in this podcast are those of the hosts alone, expressed in an unofficial capacity, and do not reflect the official policy or position of the Department of the Army, Department of Defense, or the U.S. government.

Update Required To play the media you will need to either update your browser to a recent version or update your Flash plugin.
Download audio file
Topic tags:
COVID19, Movement for Racial Justice, Civil Rights/Human Rights, Global Affairs, Government/Politics, Military/Veterans