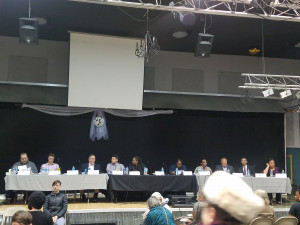 Today, Federal Judge Michael Simon declined to approve an amendment to the city's Settlement Agreement with the US Department of Justice which would have allowed the Portland Committee for Community Engaged Policing (PCCEP, pronounced "pee-sep") to satisfy the requirement for a community group to oversee the settlement's reforms. The previous version of this group, the Community Oversight Advisory Board (COAB), fell victim to official neglect and internal dissention and ceased to exist by early 2017. The PCCEP held its first meeting in November 2018, and formed several subcommittees by the following summer. One of the most active of these was the Subcommittee for People with Mental Illness (SPMI), which introduced a number of proposals to the full PCCEP over the past year.

Totality of Circumstances's Sam Bouman spoke with Meredith Mathis, a member of the SPMI who works with the Washington County branch of Metropolitan Public Defender, a few days prior to today's hearing before Judge Simon. Mathis was among many, including other subcommittee members, who testified before Judge Simon, asking him not to approve the amendment. The interview covers the history and purpose of the Settlement, PCCEP and SPMI; the SPMI's proposals; why several SPMI members recently tried to disband the subcommittee; and what Mathis has taken away from her time watching the city grapple with its responsibilities under the Settlement Agreement and, more broadly, to its own citizens who take issue with police behavior and accountability.

A shorter version of this interview aired on the February 25, 2020 episode of Totality of Circumstances on KBOO.