CHAOS: Charles Manson, the CIA, and the Secret History of the Sixties 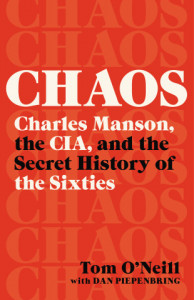 Paul talks with Tom O'Neill, whose new book offers an explosive reassessment of the most famous murder case (before O.J. Simpson's) in U.S. history, one which reverberated through American culture and cast a pall over the hippie/counterculture movement.

In CHAOS: Charles Manson, the CIA, and the Secret History of the Sixties, a journalist's twenty-year fascination with the Manson murders led to shocking new revelations about the FBI's (and possibly the CIA's) involvement in the infamous Manso case..

Twenty years ago, when  O'Neill was engaged to write a 30th anniversary magazine piece about the murders, he worried there was nothing new to say. Then he unearthed shocking evidence of a cover-up behind the "official" story, including police carelessness, legal misconduct, and potential surveillance by intelligence agents. When a tense interview with Vincent Bugliosi-prosecutor of the Manson Family, and author of Helter Skelter-turned a friendly source into a nemesis, O'Neill knew he was onto something. But every discovery brought more questions:

O'Neill's quest for the truth led him from reclusive celebrities to seasoned spies, from San Francisco's summer of love to the shadowy sites of the CIA's mind-control experiments, on a trail rife with shady cover-ups and suspicious coincidences. The product of two decades of reporting, hundreds of new interviews, and dozens of never-before-seen documents from the LAPD, the FBI, and the CIA, CHAOS mounts an argument that could be, according to Los Angeles Deputy District Attorney Steven Kay, strong enough to overturn the verdicts on the Manson murders. This is a book that overturns our understanding of a pivotal time in American history.

Update Required To play the media you will need to either update your browser to a recent version or update your Flash plugin.
Download audio file
Topic tags:
History, Media, Government/Politics

END_OF_DOCUMENT_TOKEN_TO_BE_REPLACED

Radiozine
Diversity Inc. The Failure of a Billion Dollar Business