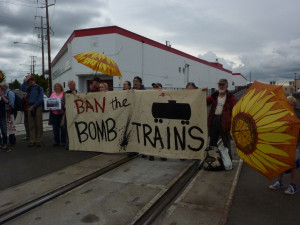 On July 6, 2013, a train hauling crude oil from North Dakota's Bakken region derailed in Lac-Mégantic, Quebec, resulting in fires and explosions that killed 47 people and wiped out a large part of the small Canadian town's center. In the six months following the deadly disaster, several more trains of Bakken oil derailed and exploded across North America.

On this episode of Locus Focus we talk with Justin Mikulka, an investigative journalist with DeSmog, whose new book Bomb Trains describes how little has been done to improve the safety of moving oil and ethanol by rail since the Lac-Mégantic disaster, and how the risks to people and the environment remain as great as they were in 2013.  We discuss how the oil and rail industries and their lobbyists — along with cooperative regulators and politicians — made protecting industry profits, not human lives, the top priority.

Update Required To play the media you will need to either update your browser to a recent version or update your Flash plugin.
Download audio file
Topic tags:
Activism, Energy/Natural Resources, Environment/Climate, Government/Politics