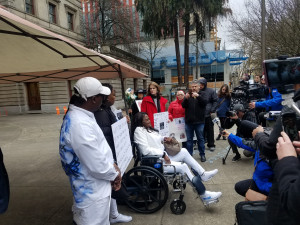 On Saturday, July 6, 2019, the family of Andre Gladen is hosting an "Angelversary" celebration of Andre's life outside of Adventist Hospital, at the corner of SE 96th Avenue and Market Street. The event is from 11AM to 1PM. In the family's words:

"Andre Gladen, a 36-year-old Black man who suffered from paranoid schizophrenia and was legally blind, was shot and killed by a Portland police officer who used excessive force on a person with mental health and physically disabilities. Andre was tased multiple times, followed by 3 shots, 2 of 3 hit directly in each lung, (KILL SHOTS). Andre was the latest in a long list of of mentally disabled people killed by police, and specifically Portland police, who failed to use de-escalation techniques in a violent encounter. Family from CA will be coming up for this memorial event on the 6-month anniversary that Andre was killed by police. This is a sacred space for mourning. Please bring flowers, candles, balloons, and other memorial items. #JUSTICE4DRE #IMSODRE #JAILKILLERCOPS"

KBOO volunteer Sam Bouman spoke with Donna Martin, Andre's sister, in June. The interview is over an hour long and a shorter version was broadcast on the July 2 episode of Totality of Circumstances, a KBOO public affairs program devoted to a holistic look at policing and community responses to policing in Portland, in Oregon, and across the country. Donna Martin discusses the events leading up to Andre's death, discrepancies between evidence and testimony, the authorities' treatment of the Gladen family and other families who have lost loved ones to police violence, and what the Gladen family would like to see change in how Portland police approach mental health situations and how officers are held accountable.

Representative news reports that detail the case can be found at the Oregonian, Portland Mercury, and other publications. You can access the full investigative file (as released, anyway), and the grand jury transcripts. A KOIN 6 report with footage of the family's February 22 press conference after a meeting with Mayor Wheeler and Chief Outlaw can be found here--this was the same day that, unbeknownst to the family as they traveled from Sacramento, a Multnomah County grand jury declined to press charges against Officer Vosu. For more information about organizing efforts by family's of victims of police violence, check out Pacific Northwest Family Circle.