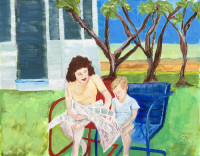 On Tuesday March 26 2019 Joseph Gallivan interviews painter Char Breshgold about her show Hold On/Let Go at Golden Gallery in Beaverton. Breshgold talks about how she was inspired to paint images from her family photo albums after her mother’s death, and then moved on to painting family scenes from strangers’ photos.

An Exhibit of New Paintings by Portland Artist Char Breshgold

After my mother’s death in 2015, I was looking for ways to hold on, to spend more time with her. Are we ever ready to let go? I drew objects from her apartment that I brought home–thimbles, seam rippers, wooden spoons, and her china cup. I paged through the few photo albums from my childhood and was immediately drawn to the black and white snapshots. They were beautifully ordinary - the angles and shadows, the partially cut off heads and occasionally smiling faces, the boats and beaches, yards and porches were so evocative. Looking at these photos planted a seed. I began painting through my grief reflecting on the images from my childhood - life-jackets, boats, and gardens.

When I first showed these paintings, I was surprised at how much they resonated with others. These images were personal to me but spoke to viewers who didn’t know me or my family. There was something I had tapped into with the ordinariness of families interacting and frozen in time.

In the last year I began painting families other than my own, including “found relatives” from photos I discovered in dusty cardboard boxes in antique stores. Seeing precious family photos discarded for anyone to claim or not, further deepened my interest in their lives. I want to honor the people I paint, giving them an element of esteem in a life that probably passed too quickly. I remain intrigued with the beautiful small details of how a hand is held, an extravagant hat or who is smiling and who might be scared. Who were these people? What were they saying to one another? Were they family? I continue to imagine their lives beyond the edges of the photo’s frame.

I know my family photos and my paintings might also end up in a dusty store one day. There is no holding on, but until we let go we have what is here, right now. I hope these paintings evoke the magic and moodiness of the simple moment.

I’m very happy to be exhibiting at The Golden Gallery, my Mom lived in a place very much like this. I’m hoping the residents as well as any viewers see themselves and their families or neighbors in my work.

The World of Jazz
The Art of Jazz