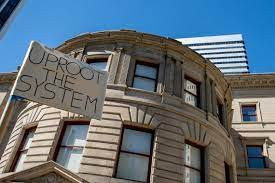 This November Portland voters will have an opportunity to vote on a complex measure that would amend the city charter in some drastic ways. The changes include rank choice voting, expanding the city council to 12 members who would each represent one of four districts, and shifting from a commission form of government, where the mayor and city commissioners directly manage the city's bureaus, to a city council that sets policy rather than managing bureaus, and a mayor elected citywide to run the city's day-to-day operations, with the help of a professional city administrator.

A few weeks ago we heard arguments in favor of the ballot measure from Charter Commission member Candace Avalos. On this episode of Locus Focus we talk with an opponent to the measure, Steven Moskowitz, who is one of three directors of a PAC that has formed to defeat the charter reform measure in November.

Steve Moskowitz is a lawyer with a practice that emphasizes municipal law and government relations.  He served as Mayor Bud Clark’s public safety policy coordinator.

Update Required To play the media you will need to either update your browser to a recent version or update your Flash plugin.
Download audio file
Topic tags:
Elections, Community Building, Government/Politics