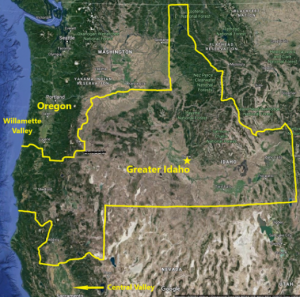 Rural Oregonians who are frustrated with the state’s progressive politics are taking matters into their own hands. County by county, rural conservatives are petitioning for ballot measures, which ask voters if they want to consider moving Oregon’s border to form a "Greater Idaho."

Five Eastern Oregon counties, including Baker, Grant, Lake, Malheur and Sherman counties, will be voting on these measures this spring. Supporters aim to become a part of a more conservative state, without leaving their communities. They hope to adjust state borders so Idaho includes nineteen eastern and southern Oregon counties, and portions of several Central Oregon counties. Eventually, they hope to include several conservative Northern California counties as well.
Both the Oregon and Idaho state legislatures, along with the U.S. Congress, would need to approve this border change for it to be legal. But, organizers are first trying to build support from the ground up. Mike McCarter, the president of Move Oregon's Border and a LaPine resident, spoke to KBOO's Hanna Merzbach about this movement.

Update Required To play the media you will need to either update your browser to a recent version or update your Flash plugin.
Download audio file
Topic tags:
Elections, Government/Politics