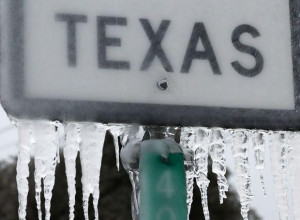 “The climate change-supercharged deep freeze covering Texas has left millions without power and water. The failure of the energy system is the direct result of corporate deregulation and an overreliance on fracked gas. While right-wing media outlets and politicians make wildly false claims about the failure of wind power, the whole disaster is yet another clear sign that we need bold government action to transform our energy system.

“The Texas energy system relies primarily on fracked gas — a source that greatly contributes to climate change, in addition to the litany of public health and environmental impacts linked to the fracking process. The failure of Texas’ gas-powered system due to freezing temperatures shows fracked gas to be an unreliable energy source.

“The other culprit is the structure of the Texas power system itself. The grid, primarily operated by ERCOT (Electric Reliability Council of Texas), is mostly cut off from the rest of the country. In the late 1990s, companies like Enron were pushing energy deregulation across the country, most notably in states like California and Texas. The ‘free market’ disaster in California led to wild price swings, market manipulation and widespread blackouts in 2000 and 2001. In Texas, critics of deregulation point out that the promised cost savings have never arrived, and there is little incentive for companies to invest in the kind of weatherization and maintenance that would have prevented some of the problems that have left millions without power. And in a deregulated market faced with a supply shortage, prices have skyrocketed.”

Jones added: “The power and water crisis in Texas is the result of climate change, fracking, deregulation, and poorly maintained water and power infrastructure. It’s exhibit A on why we need a Green New Deal that invests in building renewable energy with battery storage, modernizes our power systems, rebuilds our water infrastructure, and regulates these systems in the public interest. This should be a massive wakeup call that oil and gas barons shouldn’t be driving decisions around our energy needs. We need publicly-owned utilities that are operated for the benefit of the people and the planet, not corporate profits.”

Update Required To play the media you will need to either update your browser to a recent version or update your Flash plugin.
Download audio file
Topic tags:
Corporations, Economy, Energy/Natural Resources, Environment/Climate, Government/Politics