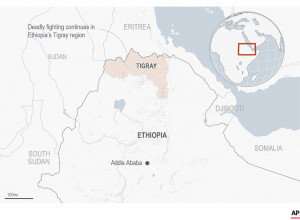 In a region of Ethiopia, a war is being waged against the country’s own citizens in the northern region of Tigray. Government forces have attacked the ethnic minority that lives there and driven tens of thousands into neighboring Sudan as refugees since the war began in early November. Telecommunications have been blacked out for 60 plus days. The violence has also been helped by military forces from Ethiopia’s northern neighbor and former foe, Eritrea.
KBOO's Althea Billings spoke with two members of the Tigray Committee of Portland, Daniel Woldu and Abi Teka. Their group is holding a demonstration in downtown Portland tomorrow Friday, January 8th at 11 a.m. at Pioneer Square.

I Stand With Tigray Linktree