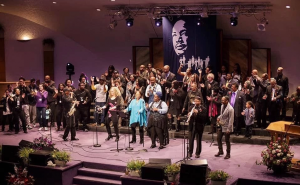 KBOO will again broadcast live, for the 35th year, from the 35th anniversary of the World Arts Foundation's annual "Keep Alive the Dream" Commemoration of Martin Luther King Day in Portland. The broadcast will be from 11 am to 6:30 pm on Monday January 20th, 2020.

World Arts Foundation originated and produced Oregon’s largest annual salute and celebration of the life of the Reverend Dr. Martin Luther King, Jr. in 1980. From 1980 to 1984, "Keep Living the Dream” was in a radio show format and broadcast live on the third Monday in January over KBOO radio, a volunteer-assisted alternative station in Portland, Oregon.

Since the first King birthday program on KBOO, the station has continued to preempt regular program to provide all-day coverage of the program to thousands of viewers, listeners and attendees.

In 1985, due to the substantial number of performers and citizens desiring involvement in the program, a move was made beyond the station’s confines to a larger public venue-Whitaker Middle School. This move allowed for live public participation and increased community involvement in the educational program. At this time, live simulcast broadcasts are our mainstay with Portland Cable Access.  Within four years it became apparent that another larger venue was necessary in order to accommodate the increasing audiences.

In 1989, “Keep Living the Dream” made a strategic move to the Jefferson High School Performing Arts Center, a facility used regularly to produce outstanding school productions that attracted large and diverse community audiences. The program continued to be simultaneously broadcast on the radio and cable television, and now includes local commercial stations that transmit to their viewing audiences selected portions of the live program throughout the day.

The program is now televised from Highland Christian Center. “Keep Alive the Dream” is now recognized as the largest tribute in the State of Oregon and has official designation from the National Martin Luther King Jr. Federal Holiday Commission.

Update Required To play the media you will need to either update your browser to a recent version or update your Flash plugin.
Download audio file
Topic tags:
Activism, African American, Civil Rights/Human Rights, Race