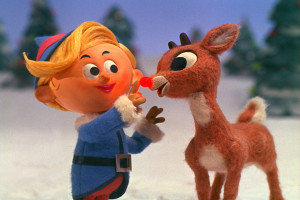 Joe Clement and Denise Morris review the Rankin-Bass stop-motion animated Christmas story Rudolph the Red-Nosed Reindeer. Originally aired on NBC in 1964, the GE-sponsored classic tells the story of two misfits and their eventual acceptance by Santa and his elves. But a deeper look reveals that social integration is a high cost to pay. This segment originally aired on December 23, 2019.

Update Required To play the media you will need to either update your browser to a recent version or update your Flash plugin.
Download audio file
Topic tags:
Arts/Culture, Film, Labor

Movin' On
Movin' On

END_OF_DOCUMENT_TOKEN_TO_BE_REPLACED

Movin' On
Movin' On