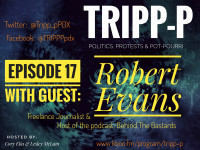 Sorry it took so long.

With the arrival of COVID-19, we were unable to access the fabulous studio resources of KBOO Community Radio, but instead gathered together some equipment to keep the show going.

We apologize if the quality is not as good as we can provide with quality studio equipment.

This episode will be the first of several episodes featuring one on one interviews between the TRIPP-P hosts & independent journalists and community reporters who are covering the recent protests in downtown Portland Oregon that were sparked by the death of George Floyd.

Episode 17 features a talk with Robert Evans, host of Behind The Bastards podcast on IHeartRadio and longtime journalist who has reported from places such as the Middle East.

We speak to Robert the day after a Pro-Trump/BackThe Blue rally and counterprotest was held downtown where Robert had been injured by the Conservative group.

You can check out Robert's work on social media and listen to his podcast online.