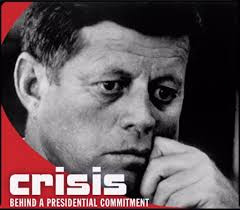 Movie Moles Denise Morris and Jan Haaken discuss “Crisis: Behind a Presidential Commitment,” a 1963 documentary film by Robert Drew, Richard Leacock and D.A. Pennebaker on the confrontation between the federal government and Governor George Wallace over desegregation at the University of Alabama. The Moles take up the lessons this documentary holds for the crises of the present, including ongoing struggles for racial justice in schools.

Update Required To play the media you will need to either update your browser to a recent version or update your Flash plugin.
Download audio file
Topic tags:
Movement for Racial Justice, African American, Civil Rights/Human Rights, Film, Government/Politics, History