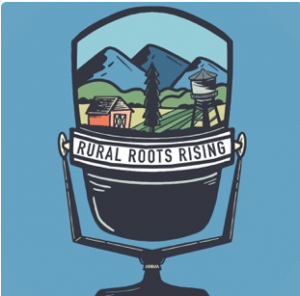 This month’s episode, Taking Risks highlights the voices of Suzanne Pharr, a renowned community organizer and movement elder, and Zachary Stocks, whose passion to make museums dynamic spaces accessible to everyone brought him into community organizing.

Find out when your local radio station is playing Fighting for Rural and download this episode’s transcript at www.ruralrootsrising.org

More on what you heard in this episode:

We begin this episode with Suzanne Pharr, a community organizer and movement leader whose decades-long career includes co-founding the Arkansas Women’s Project, and writing the books Homophobia: A Weapon of Sexism and In the Time of the Right. In this episode, Suzanne shares about how the Women’s Project launched the Women’s Watchcare Network, a network of people across Arkansas who documented hate and bias crimes, Ku Klux Klan activity, and the murders of women. The Women’s Watchcare Network released reports of this collectively documented information to push the envelope and raise consciousness about the crisis of domestic violence in Arkansas and nationally. Suzanne’s work with the Women’s Project brought her to Oregon to work on the No on 9 campaign to defeat Ballot Measure 9, which would have rewritten Oregon’s Constitution to legalize discrimination against LGBTQ+ people. While the No on 9 campaign focused on defeating the measure in cities, Suzanne, Marcy Westerling, Scot Nakagawa, and Pat McGuire traveled across rural Oregon to meet people and see what organizing was possible, and the Rural Organizing Project was born.

This episode also features Zachary Stocks sharing being a part of the first Rural Organizing Fellowship where he created Oregon HORSE, which is short for Heritage Organizations for Rural Social Equity. Zachary traveled the state working with museums and heritage organizations to become spaces for communities to discuss the issues that matter most to the people who live there. Zachary is now the Executive Director of Oregon Black Pioneers whose mission is to research, recognize, and commemorate the culture and heritage of African Americans in the State of Oregon.

Did you like the music in this episode? We featured music from Sweet Honey in the Rock, Trouvaille, and The Road Sodas. Please support these artists!

Rural Roots Rising is a production of the Rural Organizing Project, a network of more than 65 groups across Oregon who organize for human dignity and advance democracy. Additional support for the creation of the episode came from Brenda Flores. Thank you for listening!