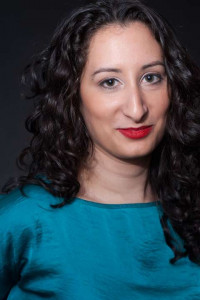 Dmae talks with Tracy Cameron Francis, theatre and interdisciplinary director as well as the artistic director of Boom Arts. She is perhaps the only Egyptian-American director in Portland. Boom Arts is collaborating with Risk/Reward and XRAY. FM to present PAVEMENT: parking lot drive-in performances on July 18 at 7pm and 9pm. We'll find out more about the outdoor performance which you can also see online or hear on the radio. And it's an opportunity to get to know Tracy who grew up in Portland and hear about her career leading up to becoming AD of Boom Arts for the last year.

Using drive-in movie theaters as inspiration, audience members will drive to a secret location in Central Eastside sent to them only hours before the show. Then, they will park their cars and witness the spectacle from the safety of their vehicle. XRAY.FM’s team of sound engineers will relay the sound directly into audience cars as artists perform throughout the parking lot, just like at a drive-in movie. Food will be available on site for pick up. The show features short performances from a variety of local artists including dance artists: Suba Ganesan (Portland Creative Laureate), KT Kusmaul(Body Home Fat Dance), Oluyinka Akinjiola (Rejoice! Diaspora Dance Theater), Musicians: Kenji Bunch and Monica Ohuchi (Fear No Music), Portland Opera, and Amenta Abioto, theatre artist Gerrin Mitchell, and spoken word by Anya Pearson.

Tracy Cameron Francis is a  first-generation Egyptian-American director, interdisciplinary artist, and producer. She is currently the Artistic Director of Boom Arts and formerly was the co-founder and artistic director of Hybrid Theatre Works in New York which focused on international collaboration and social justice. She was a 2017 TCG Rising Leader of Color fellow,  is a core member of Theatre Without Borders  and currently serves on the steering committee for the newly formed Middle East and North African Theatre Makers Alliance . She holds a B.A. from Fordham University in Middle Eastern Studies and Theatre, is a member of the Lincoln Center Director’s Lab and an associate member of SDC.

Update Required To play the media you will need to either update your browser to a recent version or update your Flash plugin.
Download audio file
Topic tags:
Arts/Culture, Women
Genre(s):
Arts and Culture