Sherlock Holmes and The Case of the Headless Monk 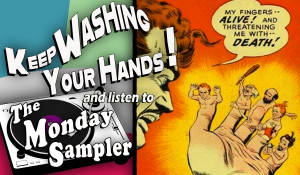 Back for another month and we start off with a jam pack show. In the second hour we will feature a classic radio drama featuring Basil Rathbone and Nigel Bruce as Sherlock Holmes and Dr Watson in an ordinal Mystery called The Case of the Headless Monk. But before that Emily Goodwin from Galaxy Press calls us from Hollywood to update us on the statis of the ongoing  Writers of Tomorrow contest for amateur Science Fiction and Fantasy writers, which they have had to modify this yearbecause of the current crisis. Emily will fill us in on how the contest will progress this summer. Fortunato will also review some programs he has caught on a streaming service that you might be interested. So stay safe, keep washing your hands, and tune in.

Update Required To play the media you will need to either update your browser to a recent version or update your Flash plugin.
Topic tags:
Arts/Culture, Music, Radio Theater
Genre(s):
Arts and Culture, Jazz, Radio Theatre