Another World is Possible 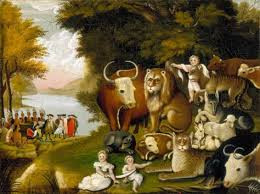 With this segment we inaugurate a new feature. In the first installment, Norm discusses some of the questions that arise in thinking about social and economic alternatives and how utopian and dystopian literature illuminate these. As illustration, Patricia Kullberg reads from a Luisa May Alcott short story, “Transcendental Wild Oats,” about an effort to found a utopian community and the gender differences that arise in both its founding and its failure. Candy Luisa Herrera explains her suggestion of musical theme for Another World is Possible.

Painting by Edward Hicks (1780 -1849) a Quaker minister and naive artist, in one of his many depictions of a “peaceable kingdom.”

Update Required To play the media you will need to either update your browser to a recent version or update your Flash plugin.
Download audio file
Topic tags:
Arts/Culture, Community Building, Fiction, Gender, Women