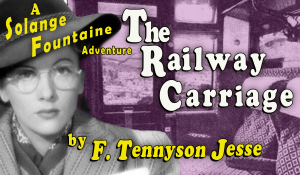 Tonight's featured writer is mostly known for her reportage of "true crime" and documentation of the many tasks taken up by women attached to The Royal Army in World War I. As well as her novel "A Pin To See The Peepshow"(1934). She also created a female series detective in 1918, named Solange Fountaine who appeared until 1931. On what was to be a routine train ride back to London, occult investigator Solange Fountaine has one of her "strange" feelings about the two quiet people sharing her compartment. She begins to suspect that they have a connection to the near by execution of a convicted murderer that happen that morning.

Update Required To play the media you will need to either update your browser to a recent version or update your Flash plugin.
Topic tags:
Arts/Culture, Fiction, Radio Theater
Genre(s):
Arts and Culture, Radio Theatre