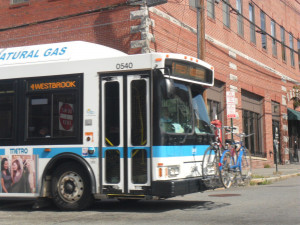 The multi-billion dollar investment would focus on “corridors” in the region, major thoroughfares that are smaller than freeways.

A notable investment would be in the southwest corridor, where TriMet hopes to build a MAX line connecting SouthWest Barbur Boulevard with Tigard.

KBOO’s SJ Oxendine was at the meeting and got a chance to catch up with some attendees about their priorities for Metro regional transportation.

Hi, this is Jason Snyder. I'm the Mayor of the city of Tigard. And I am here to testify and did testify to the Council about how we are generally supportive of the approach that Metro has taken and the projects that are in line to be funded in the transportation measure in 2020. We-we definitely support the Southwest Corridor which we feel is a critical project for our community in Tigard and southwest area of Washington County and Multnomah County and we also have some concerns and gave feedback to the Metro Council tonight about the fact that Highway 99W should be included, at least for study in the 2020 transportation package. So that was what I what I was speaking about tonight

Okay, How is all of this about to be funded? How does -- this for people who wonder where the dollars come from-- will there be a new tax raise? Or how exactly will all this work?

Well, there's a- that's a great question and one that the Metro Council still has to work through. They've been studying that, their first step in the process was to figure out identify which projects needed to be done the highest priority, and figure out how much those would cost and then figure out how to fund that. I anticipate that the- the funding for these projects will be done in a variety of different ways that may include various different funding mechanisms and potentially some additional taxes, pedestrian and bike connectivity is something that we generally support. And you know, our goal in the city of Tigard, our vision is to be the most walkable community in the Pacific Northwest. And part of that is making sure that you've got pedestrian and bike facilities.

How where exactly would you say we are in the process of getting all this done?

We're at the point of the Metro Council, deciding what projects would-  will and won't be included in the measure that is moving forward. Or plan to move forward in November. I anticipate it will be on the ballot in November of 2020.

Yes, my name is Paul Savas. I'm a Clackamas County Commissioner, and I'm here today advocating for full funding of the Sunrise Corridor. There reason is that it's an important gateway infrastructure needed to build the housing and provide the transportation infrastructure we need, both for transit multimodal cars, trucks, freight and so on in order to let that area of the county develop. Metro brought that property into the county 20 years ago, 13,000 acres and we have yet to have the highway built. It's been on the books for decades, and we're trying to move this project and the time is critical. Now with housing and people going homeless, it's critical that we build this and make that property area available for housing. Well, the the argument right now, which I somewhat agree with, is that the there's a lack of housing. So therefore with the lack of housing people that are moving here with more income levels, higher income levels are being out pricing people with lower income levels to meet the rising rents. So that market pressure depends on more supply. So we have actually the highest amount of land available for housing. But it's sitting there again, not served by the critical infrastructure such as highways. So by building the housing out there, that will reduce the cost or the spike or the rapid rise of rents, due to those market pressures. Supply and demand.

My name is Jerry Parker. I live in Northeast Portland. My concern is is that the same people are paying for this and the same people are exempt. They want to settle the automobile owners and the property owners with the tax to pay for it while the bicyclists and transit riders are exempt and yet they are going to be the primary beneficiaries of this and then the- the- the other thing that I was very concerned about is-is when they remove traffic lanes on streets, it creates more congestion, it creates more fuel consumption and it creates more emissions. And that's what this a project - project - these projects appear to want to do is remove traffic lanes, which will do all of this and replace them with bus lanes and bike lanes. And the public in January of last year, has said in Metro Survey that they want more capacity for motorists, not less and more capacity in certain places will help with the emissions and the fuel consumption.

Hi, my name is Jesse Lopez. I'm with the Portland 350 PDX transportation justice team. I just gave testimony in support of a number of the proposed plans for the Metro 2020 bond including investment in underserved communities, investment in mass transit and investment in safety. And we criticize investments in auto focused infrastructure, particularly at 82nd and Airport Way. Instead, we recommend that Metro supports the recommendations put forward by the Getting There Together coalition to support bus and rail options.

Yeah, so specifically the idea is right now the, the Max has a single rail, a single line from-to the airport. And so it's at grade, which means that there's conflict between the-the train and the cars so that they have to share time at this intersection. So our idea is instead of building an overpass for cars, build an overpass for the train instead, so that you're prioritizing the train users and folks that are getting to work and and flying by-by train, and to add an additional train line so that you can run trains more frequently to and from the airport. And also to extend bus 72, along 82nd, all the way to Airport Way so folks can take 82nd via bus and not have to go transfer to gateway and all the way around to the airport. A lot of the funding that's proposed now would go into building flyovers for vehicles, it wouldn't they would add additional vehicle travel links, and flyover, so it basically you would make the Airport Way basically more like a highway, a typical Interstate, so we're saying there's enough capacity there as it is now. But if you want to reduce that conflict between the trains, essentially and the road, you can just, you can just build a overpass for the trains and build another line so that it's better service at the airport.

My name is Michaela Bishop. I am a member of Sunrise PDX, part of the Sunrise Movement. I'm 21 years old. I'm a student at Portland State University. And I showed up tonight to oppose any car fueled corridor investments and to try to support fair free transit, as it's suggested by OPAL and a ton of other great organizations.

This is SJ Oxendine reporting for KBOO Radio