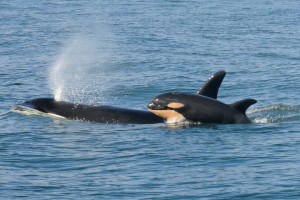 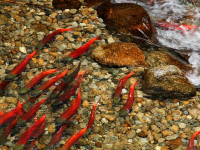 For centuries, three unique pods of orcas have hunted chinook salmon along the northwestern Pacific coast. Yet wild chinook salmon here are increasingly scarce. The orcas are going hungry, their numbers dwindling along with their primary source of food. Extinction looms for both species. The orcas need roughly a million salmon a year, but where to find a million fish?

On this episode of Locus Focus we talk with writer Steven Hawley and director Michael Peterson, whose new film Dammed to Extinction, looks at the solution to saving both the orcas and the salmon—getting rid of four fish-killing dams 500 miles away on the largest tributary to what once was the largest chinook producing river on earth.

Steven Hawley is the writer of Recovering a Lost River, a book that inspired the documentary film Dam Nation by Patagonia. He is a senior correspondent at The Drake Magazine and his work has appeared in Outside Magazine, High Country News, Fly Fisherman, Patagonia, The Seattle Times, and the Oregonian.

Michael Peterson is a documentary film director living in the Pacific Northwest of the United States. Prior to directing Dammed to Extinction Peterson directed The Rapid Decline of the Lower Deschutes River.

Learn more about how to help the Snake River Dams get breached:

Save Our Wild Salmon

Update Required To play the media you will need to either update your browser to a recent version or update your Flash plugin.
Download audio file
Topic tags:
Activism, Environment/Climate, Media

Movin' On
Movin On In Harmony

END_OF_DOCUMENT_TOKEN_TO_BE_REPLACED

The Monday Sampler
"Johnny One Eye" by Damon Runyon