The Father of the Modern American Drug War 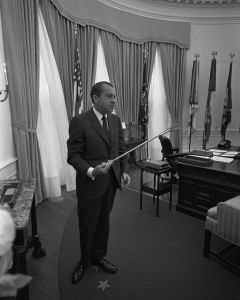 A look back at the father of the modern American drug war, disgraced former president Richard Milhouse "Dick" Nixon.

On this edition of Free Culture Radio, we look back at the president who is most strongly associated with creating the war on drugs: disgraced US President Richard Milhouse Nixon.

Say what you will about disgraced former president Richard Nixon.

No really, go ahead. Say what you will.

Heck, I’ll start: disgraced former president Nixon was a hypocrite, a demagogue, a drunk, a bigot, a sexist, an anti-semite, and a racist. Can you imagine? I mean, how on earth did someone like that ever get elected president? Oh, right, pretty easily really.

Anyway. On this instalment of Free Culture Radio, we take a look back at disgraced former president Richard Nixon, would-be TV critic and father of the modern drug war.

Update Required To play the media you will need to either update your browser to a recent version or update your Flash plugin.
Download audio file
Topic tags:
Drugs, Government/Politics, History