Excerpts from The Comedians, a history of American Comedy, By Kliph Nesteroff, Part 3 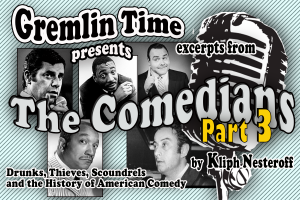 In the late 1950's the show business establishment hated the two hottest comics of the day, Lenny Bruce and Mort Sahl. And did all it could to derail their careers. It was not until comedian Redd Foxx began to appear on a series of "party records" that anyone thought that there was a market in recorded comedy. Jonathan Winters was the most creative, freeform improvisational comic of the day and was in demand to perform everywhere. But, his success would almost destroy him. Dick Gregory would turn his success toward helping the Civil Rights Movement, even at his own expense. And, when Jack Parr left NBC's The Tonight Show the search for a replacement host would lead Jerry Lewis to his greatest disaster. All this, as Fortunato reads more excerpts from "The Comedians - Drunks, Thieves, Scoundrels and the History of American Comedy" by Kliph Nesteroff, <http://classicshowbiz.blogspot.com/>

Update Required To play the media you will need to either update your browser to a recent version or update your Flash plugin.
Topic tags:
Arts/Culture, History, Humor, Media
Genre(s):
Arts and Culture, Spoken Arts