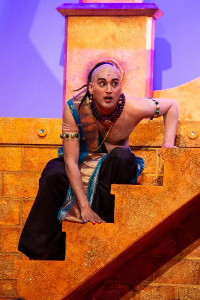 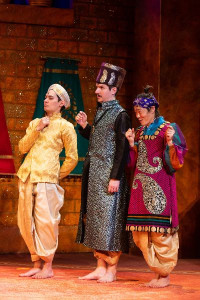 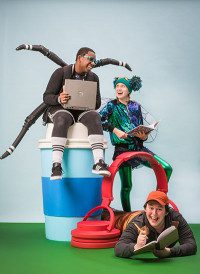 Dmae features two premiere Portland theater companies for youth and families. First up we talk about Tenali, the Royal Trickster at Northwest Children's Theatre  (running till May 12) with artistic director Sarah Jane Hardy who co-directed once again with Anita Menon to create this new show. She'll be joined by actor Ken Yoshikawa and musician Sowmini Sengupta. . And in the second part of the show, we'll hear from director Francisco Garcia about Diary  of a Worm, Spider and Fly at Oregon Children's Theatre opening May 4-June 2.

From the creative team that collaborated on NWCT’s Chitra: The Girl Prince and The Jungle Book comes a new original show based on an a beloved character from Indian folklore, Tenali Ramakrishna or Raman was a poet scholar, thinker and special adviser to the royal court. In this story told by NWCT,  the King’s beloved peacock crown mysteriously disappears, it’s up to Tenali to uncover the culprit and restore order to the kingdom, all while staying one step ahead of his enemies in the king’s court. NWCT has successfully partnered again with director/choreographer Anita Menon on a comedic whodunit with Indian dance.

Diary  of a Worm, Spider and Fly

Is Spider getting too big for his own skin? Will Fly find her superhero powers in time to save her Aunt Rita from peril? Will Worm learn to stand on his own two feet...even though he doesn't have feet?  This is the world from a bug's perspective and a look at their lives which seem a lot like ours.

This musical captures the humor and whimsy of the wildly popular books by Doreen Cronin and Harry Bliss.

The Big Ideas
Growing up can be scary, but also fun and exciting.
Everyone has unique skills and talents.
Complex worlds can be found right under your nose.

Recommended for ages 4 and up. Runtime: 60 minutes.

Update Required To play the media you will need to either update your browser to a recent version or update your Flash plugin.
Download audio file
Topic tags:
Arts/Culture, Asian Pacific American, Youth
Genre(s):
Arts and Culture