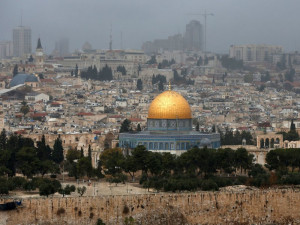 Today on Arab Voices we will air the remarks delivered at "The Realities of Jerusalem Today" panel held on October 11, 2018, at the Houston Jerusalem Conference entitled "JERUSALEM: WHAT MAKES FOR PEACE?", organized by Bright Stars of Bethlehem. There were three speakers at that panel:

Tarek Abuata
Executive Director of Friends of Sabeel North America. He previously worked as the coordinator of the Christian Peacemaker Team in Hebron

Majed Bamya
Political Coordinator and Legal Adviser for the Permanent Observer Mission of the State of Palestine to the United Nations in New York, and Head of the International law and Treaties Department at the Palestinian Ministry of Foreign Affairs.

Arab Voices (www.ArabVoices.net) is an award-winning independent radio talk show that has been broadcasting live every Wednesday since April 2002 on KPFT Radio (Pacifica Network), 90.1 FM in Houston, Texas. The show discusses important issues with distinguished guests and politicians from the around the globe covering a wide range of topics such as the Arab world, its history, culture and civilization, Arab-Americans, Muslim Americans, civil rights and liberties, immigration issues, media coverage of the Arab world, the U.S. Foreign Policy towards the Middle East, and more.

Update Required To play the media you will need to either update your browser to a recent version or update your Flash plugin.
Download audio file
Topic tags:
Civil Rights/Human Rights, Faith/Religion/Spirituality