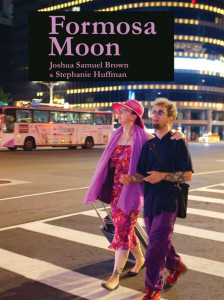 Our Radiozine guests today are Joshua Samuel Brown and Stephanie Huffman, authors of the new book Formosa Moon, from Things Asian Press. Formosa Moon is part memoir, part travel guide, in which Josh and Stephanie tell the story of their move from Portland, Oregon to Taiwan in January of 2017.

Josh was familiar with Taiwan through his work there as a travel writer and tour guide, and absolutely loves the place. His partner, Stephanie, had never been to Taiwan, but knew all during their time in Portland that Josh would one day want to move back there together. A decision that would take into account Stephanie’s love for him, her taste for adventure, and an aversion to gluten.

Josh is the author of Vignettes of Taiwan, How Not to Avoid Jet Lag & other tales of travel madness, and 13 Lonely Planet guidebooks focusing on his journeys through Asia and Central America. Stephanie is an artist, writer, costume designer, and puppet master, who’s currently pursuing her Master’s Degree at Taiwan’s National Chengchi University. Together with Josh’s brother, Seth Brown (aka Yorick Jones), they wrote, performed, and produced the now-defunct radio comedy show, Puppet Radio Theater, on KBOO.

According to author, Eve Brown-Waite, "Formosa Moon is more than just another wonderful travel book about Taiwan. It is armchair travel at its finest with a delightful He Says/She Says twist. Like the beautiful island itself, Formosa Moon will surprise and delight you at every turn. You don’t have to know Taiwan, or even have any plans to ever visit the place to love this book. But after reading Formosa Moon you might feel compelled to make the trip yourself."

Josh and Stephanie join us from their offices in Taiwan, through the miracle of Facebook Messenger.