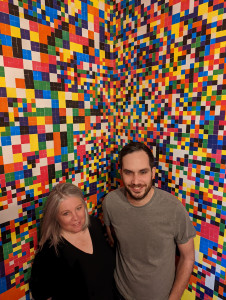 On Tuesday November 30, 2021, at 11.30 AM, Joseph Gallivan interviews artist Noah Matteucci and gallerist Jamie Wilson about Matteucci’s show “Random 8” at Agenda Gallery in Southeast Portland.  Matteucci has filled covered the walls with thousands of colored squares of paper, like pixels in a glitching digital image. However, the squares or made with wood block prints using the four color ink process called CMYK. The artist explains his position on the threshold between the digital and the analog, and his gallerist explains what type of art she likes to show at Agenda, and what the future for Agenda is as it moves location.

Noah makes prints by combining digital technology with analog printmaking processes, writing looping algorithms that translate into woodblock & screen prints. Printmaking is just an extension of the code — the performance of an analog algorithm — every pulled print an iteration of the program.

Process outweighs outcome and outcome is arbitrary. With every work there is a seemingly infinite number of possible arrangements, and the repetitive and absurd Sisyphean task of attempting to print all of them becomes an obsession. The use of simple forms, straight-out-of-the-can process colors, random number generators, and the printed mark, all underscore a deliberate attempt to deny intention and cede artistic control to chance. To affirm chance is to affirm the world as it is — a series of material events in a constant state of becoming. By printing the same thing over and over again you start to see the differences. Nothing that repeats is the same.

Noah is an artist and printmaker living and working in Vancouver.

No, not that Vancouver. The other one.

He studied printmaking at UC Santa Cruz and UH Manoa, two very fine institutions for which he is still paying student loans. One of his diplomas is signed by Arnold Alois Schwarzenegger — an anecdote that receives tepid laughter whenever he repeats it at social gatherings.

During the day you can find Noah working in the Fine Arts Department at WSU Vancouver. At night he makes prints in a little studio located in the bowels of his house — a space that many people would describe as a basement.

Noah is writing this bio in the third person in an attempt to make it seem like someone else is writing it about him, preferably someone held in high regard in their respective field. He doesn’t think it’s working.

agenda's founder, Jamie Wilson has been actively collecting art since the 1980s. In 2000 she opened her first gallery, Square Blue, in a tiny upstairs off-street location in Newport Beach, CA. The hard-to-find location quickly became a hub for some of the most cutting edge and experimental art going on in Orange County. Many of those then unknown artists went on to major gallery representation and museum collections.

Those early relationships have enabled the newest iteration of Wilson’s art endeavors to include some of the finest emerging and mid-career art available today. agenda’s main focus is educating collectors to become adept at spotting talent and engaging in the conversation that art exists within. You should never feel intimidated by questioning what art really is and agenda is comfortable having that dialogue with you.

Exhibitions at the gallery rotate about every 5 weeks and there are many other events that agenda participates in. Join the mailing list to be kept informed and to become involved.

KBOO Radio is a volunteer-run nonprofit and it needs your money if you are listening.