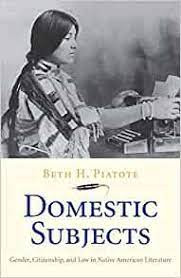 Mole Julian Ankney interviews Beth Piatote, a Ni:mi:pu: (Nez Perce) Professor of Native American Studies at Berkeley, about literature and fiction as acts of radical resistance, healing and hope for our future. A scholar of Native American/Indigenous literature and law; a creative writer of fiction, poetry, plays, and essays; and a member of Chief Joseph's Tribe and the Colville Confederated Tribes, Professor Piatote is an Indigenous language revitalization activist/healer, specializing in Nez Perce language and literature. She is the author of two books: Domestic Subjects: Gender, Citizenship, and Law in Native American Literature (Yale 2013), which won an MLA award; and The Beadworkers: Stories (Counterpoint 2019), which was longlisted for the Aspen Words Literary Prize, the PEN/Bingham Prize for Debut Fiction, and shortlisted for the California Independent Booksellers Association “Golden Poppy” Award.