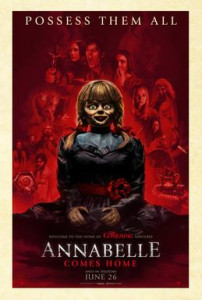 Dolls are inherently creepy. When parents leave for a weekend, the kids left behind invariably cause trouble, i.e., while the cat’s away the mice will play. Pandora must always open the box.

These are the ingrained precepts that guided the makers of Annabelle Comes Home, the latest film in the Conjuring series, and the next in an already endless summer of remakes and sequels. It’s also the third deadly doll movie in as many weeks after the Child’s Play reboot and Toy Story 4, which features demonic ventriloquist dummies.

The Conjuring re-introduced the real life “consultants of demonology and witchcraft” Ed and Lorraine Warren, who were already relatively famous for their work on the supposedly true story of the horror in the house in Amityville (disputed). The success of The Conjuring fright fest led to the spinoff Annabelle, itself dividing, like a diseased cell, into a new franchise, while another branch came seemingly out of nowhere, the so-called Nun series, after its titular progenitor, and leading like a crack in a frozen mud puddle to The Curse of La Llorona. The producers are pleased to call all this the Conjuring Cinematic Universe, which bodes ill for the future of horror films, if indeed not all cinema, as comic book and horror specialists grow inclined to issue annual re-tellings of the same stories on the big screen instead of weekly television bulletins on the small screen, resulting in a set of spectacles that demands viewers to continually brush up on all the films in order to understand even just one of them. Homework, it’s called. And bear in mind that there are also 17 Amityville movies.

The current result of this Fibonacci spiral is Annabelle Comes Home, third in the doll series, in which the Warrens go off on a mission to rout a potential demon and leave their daughter Judy and an apparent task force of babysitters to wonder what to make of all that strange stuff locked up in the basement. If they had waited for the parental Warrens to return, the kids simply could have bought admission tickets to the Occult Museum, which the Warrens operate out of their house. The babysitter is fresh-faced and a good person ... blonde ... her best friend, who crashes regularly weekend, brunette, and working through “I killed daddy issues,” resulting in her sneakig into into the locked room in the basement where the Warrens store all their demonic debris, and for plot purposes touches not only Annabelle but also every other object in the room, like a methodical Indiana Jones finally getting access to that government warehouse. This fondling “releases” the evil otherwise trapped in these objects, which then proceeds to wreak havoc in the house, the school, and the town.

In short, it’s an unofficial remake of the Goosebumps movie with Jack Black and the TV show Warehouse 13. Not only is the narrative implausible and hard to follow, but also the film is even hard to see, the cinematography by house photographer Michael Burgess presented in shades of black, from inky to sable. This strategy is seen in the previous franchise entries so perhaps it is designed to make traditional jumps and other scare tactics seem somehow fresh, given that there is nothing in Annabelle that hasn’t already been seen in movies since about 1915. The confusion drifts down to the film’s very title. It’s a puzzle, because the Warrens have brought the doll to a new home, not an old abode, though maybe the meaning is that “evil has finally come home to the Warrens.”

But what is not puzzling is that the appetite each entry in this jumble of religious tales stirs is immense. Bible Belt denizens apparently like to be kept on their toes by the unseen threats lurking around them, and teens seem to like the slow burn stimulation. Meanwhile, everyone pretends that this tripe is based on “real events,” to the benefit of the Warrens as well as the filmmakers. (Mrs. Warren died this year).  Gary Dauberman is the credited director, but James Wan is the presiding genius over this franchise. Not to be confused (as I do) with James Wong, who comes out of the X-Files Universe and the Final Destination films, or Justin Lin of the Fast and Furious films, Wan helped invent the Saw series, before graduating to the Conjuring Cinematic Universe and ending up in the Aquaman franchise. He is one of those filmmakers whom the boys at the blogs call a Vulgar Auteur; a group of visually-busy helmers with palettes of dynamic but often limited stylistic tics who specialize in gross genres. Michael Bay comes to mind, but one of the best is Jaume Collet-Serra (Orphan, The Commuter), whose films give the viewer real pleasure. But it is not always easy to identify a James Wan film by sight alone, unlike a Hitchcock or Ford or Welles film. His tricks resemble many other contemporary and previous action directors. Much as one would like to see his visual energy embrace something noteworthy, the promise of a “James Wan film” is that it will simply be wan.

All all that negativity being said, the movie has funny parts .. set decoration is slyly witty, the teen leads are effective, and and it might be fun on home video  ... but the big screen will not lead to screams

Movin' On
Movin On In Harmony