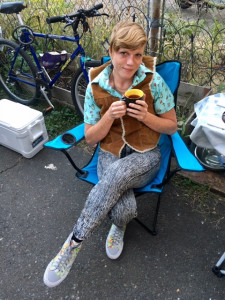 Published date:
Thursday, October 12, 2017 - 10:30pm
Volunteers make KBOO what it is. Please get to know the people that make KBOO truly great.

My name is Leidi Monte (pronounced Lady Maunt-ee). I am passionate about free expression, and building access to people and tools that support growth, justice, and harmony. I write my own music and poetry, and am completing a musical project which will advocate for my community and express my unique voice as an intersex person.

2. What's your favorite thing to do on a day with no commitments?

I was introduced to the KBOO Beloved Community when my intersex friend who was already a volunteer here invited me to guest co-host on their radio show, and talk about my experiences as well as the support group for intersex people I founded in Portland, the NorthWest Intersex Action League. I was interviewed by a couple of different hosts about the cause I represent, and I was so impressed with the structure and mission of KBOO and the caliber of people that I decided to attend a volunteer orientation

Since beginning at KBOO I have volunteered during pledge-drives answering phones, announced the news, hosted live music broadcast events, established an open collective called Lighthouse Productions Art Collective, and developed as a volunteer producer for our collective’s radio show called Lighthouse Lessons. Through the show I am able to help provide a broadcast platform for different communities in Portland by airing programming that is designed to uplift, inspire, and support women, youth, communities of color, sexual minorities, and other marginalized populations of people.

I have learned so many skills essential to radio broadcast, like interview and microphone techniques, FCC laws, as well as audio engineering and how to operate a switchboard. But the largest piece I have learned is about how community is organized, and what it takes to function as member in a collective plural. Keeping an open heart as a matter of business is essential to feeling successful when you walk out of KBOO at the end of the day.

6. Are there other things you'd like to do at KBOO in the future?

Favorite moments fall from the ceiling at KBOO, it’s hard to pick one….

I think my favorite moment is when after the mad scramble of producing a show you walk outside feeling exhausted and used but great, because you’re done (until the next show!).

KBOO has been crucial to the process of self-advocacy and awareness raising that I undertake daily as an intersex person… they have provided me a platform to talk about issues which affect me, taught me technical skills necessary for a creative industry, and shown me a community that is accepting, safe, and engaging to me as a marginalized person.

KBOO is a beacon for people who want to see and learn alternative ways of living—without contingencies based around profit and marketability.

10. What else do you want people to know about you?